Brought by our partner ‘Murder inc.’

Do you want to be Hercule Poirot for one evening and to take part in one of the only real, original murder dinners? Say you are proposing….

Mr. Sylvain De Vocht, a rich miserable man, was murdered. Strangely enough, during his last days he already suspected that he would be murdered. He therefore had his good friend notary the Pelsmaecker draw up a peculiar will. A telling will. Anyone who benefits from the opening and reading of this will is invited by his notary. Besides the guests, the legal heirs of Sylvain de Vocht also appear to be present. You will be introduced to his old-fashioned housekeeper, his somewhat lavish business partner with his wife, his nephew (or rather his cousin…)…..

While looking at the will, it becomes clear that De Vocht will not simply distribute his fortune among his heirs. More even, more eccentric as he was, he links his legacy to a match. The one who finds his murderer gets his whole fortune! Notary De Pelsmaecker is therefore assisted during the further course of the evening by inspector Villard, inspector of the judicial police. During the course of the dinner, guests will gradually get a clearer picture of the interrelationships in this bizarre family. The heirs present their alibi with great conviction and try to place the other heirs in a bad light. You ask questions, you observe, you think you are a real Hercule Poirot! Until suddenly…. a second murder happens. The inspector takes charge of the investigation and searches for the perpetrator based on his data and the information collected from the guests.

Who is the killer of Sylvain de Vocht? Why was a second person murdered? And what happens to his fortune? For this you will have to be present at the opening of the will!

Animation during your evening party

We provide a typical casino atmosphere with authentic game tables and professional, multilingual croupiers. Some examples: Blackjack, American roulette, craps…. and own game tables such as the Speedstacktable and the 60-secondstable,… Each guest gets a package of’ game’ -dollars at the start. At each table you can exchange your dollars for jetons. At the end, all jetons are returned to the croupiers who count everything per person. A prize is provided for the winner.

Go back to overview

Duration: 4 hours (during a dinner) 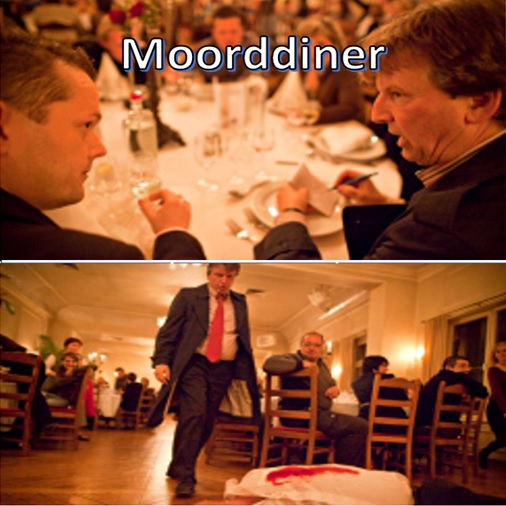